And Increase Your Chance to Achieve Better-Than-Average Performance.

How many stocks do you need to hold to avoid over-diversification? What’s the point of holding hundreds of stocks when all it becomes is a proxy for the market? Indeed, Warren Buffet has said, “I cannot understand why an investor would put money into a business that is his twentieth favorite rather than simply adding more money to his top choices.”

We all know the success Warren Buffet has had holding only a handful of companies, but does his strategy sufficiently reduce unsystematic risk? Oddly enough, the prevailing academic literature supported Buffet when he first began to accomplish his above average performance returns.

In 1968, Professors John Evans and Stephen Archer of the University of Washington published “Diversification and the Reduction of Dispersion: An Empirical Analysis” (Journal of Finance, 23, 761- 767). This is recognized as the fi rst paper to attempt to determine the optimal portfolio size. They concluded that no more that 10-15 stocks were needed to achieve suffi cient diversifi cation.

Nearly a decade later (1977), Elton, E.J., and M.J. Gruber wrote “Risk reduction and portfolio size: an analytical solution,” (Journal of Business, 50, 415-437). They used a slightly different approach and calculated one could achieve diversifi cation with anywhere from 15-100 stocks. 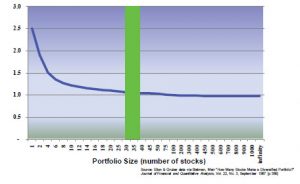 In 1982, Tole, T. came out with his research paper “You Can’t Diversify Without Diversifying,” (Journal of Portfolio Management, 8, 5-11). He found one need only have 25 to 40 stocks to achieve optimal diversifi cation.

Finally, in 1987, Statman, M. published the now seminal “How many stocks make a diversified portfolio?” Journal of Financial and Quantitative Analysis, 22, 353-363. Statman used two different techniques and concluded the optimal portfolio size ranged between 30 and 40 stocks. This is the paper the Charter Financial Analyst Institute currently cites as the defi nitive answer when it comes to the question of how many stocks should a portfolio hold.

Thirty or so years ago the interest in optimal portfolio size peaked. At that time, trading costs made it diffi cult to create the kinds of index-based products we have today. Simultaneously, we saw the emergence of the Effi cient Market Hypothesis (EMH) – the idea that all knowledge is in the price of the stock. But, with the growing number of pricing anomalies, EMH has been shown to be incorrect.

A decade ago Stanford Professor Charles Lee suggested a “naïve view of market effi ciency, in which price is assumed to equal fundamental value, is an inadequate conceptual starting point for future marketrelated research.” He has said the Effi cient Market Hypothesis (“EMH”) “is an over simplifi cation that fails to capture the richness of market pricing dynamics and the process of price discovery.” He points out its current use operates “with no reference to the original caveat.” Lee feels “that moving from the mechanics of arbitrage to the EMH involves an enormous leap of faith. It is akin to believing that the ocean is fl at, simply because we have observed the forces of gravity at work on a glass of water.”

This growing sentiment in the academic arena coincides with the growing discontent among investors with the “stylebox” approach that came out of EMH. In fact, investors once understood the foolishness of buying a handful or so of mutual funds for the sake of “diversifi cation.” They then knew the dangers of building portfolios consisting of hundreds of stocks. These virtual indexes have lagged considerable behind actively managed portfolios in recent years. As a result, there is greater interest in determining the answer to the question “How many stocks do you need to hold to avoid over-diversifi cation?”

Perhaps Warren Buffet gives us the answer when he says, “Diversifi cation is protection against ignorance, but if you don’t feel ignorant, the need for it goes down dramatically.”